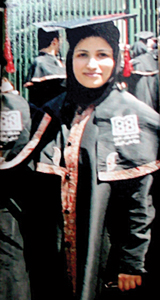 In the events of Iranian custom, on 25 Nov, 2007 the commemorate of forty day after deaths has been organised for Doctor Zahra Bani Yaghoob who killed by Basig’s Militia in Hamadan, Hamadan it’s a Western North side province of Iran.

The mourner gathered by her grave on lot 24 at Behesht Zahra Cemetery in Tehran.

Dr Zahra Bani Yaghoob’s mother arrived to her daughter grave, her body was weaken, her legs was shaking and she couldn’t stand on her feet, she fell over and hugged her daughter grave, tearful and mourningly asking with what guilt and crime they killed you!?

Zahra’s father tearful mourningly said finally the truth will be reveal and we will find her killer.

Dr Zahra Bani Yaghoob arrested by the head quarter of Basig’s Militia at the publics park in Hamadan while she was walking with her fiancé, the couple has been stopped by Militia and requested to show a legal marriage certificate. For the reason of not having that marriage certificate handy to show, she was arrested and 2 days latter she died suspiciously.

When her father and mother arrived in Hamadan to find out her situation, the Militia told them that, she committed suicide, Dr Zahra Bani Yaghoob parents and friends doesn’t believe that is a suicidal incident, because Dr was very strong and an athlete person.

Zahra Bani Yaghoob has studied at special school for seven years that school was for supreme intelligent students to study there. Latter on Zahra entered to University and completed medical studies and become a Doctor, and then on her choice she went to a remote village of Hamadan one of the Iran province to practice her medical profession.

When Zahra and her fiancé has been arrested, then separately has taken to the Militia Station, at the cemetery every body were ask her fiancé were you with her while taken to the station, he couldn’t answer them, because he was separated from her in the custody, that caused him a condition of shock too, which he can not talk.

There are a lot of none answered questions about the moments while she was on her own in custody, such as; what they were doing to her, what was on her mind, how she coped, and how this innocent person has died, what for and why.

One day after her arrest, her birthday was on, that’s why her mother light on a candle in their dark sad house to commemorate her.

Shirin Ebadi revealed that based on the given details by Zahra’s family, she was bleeding from her nose and ears when she was being buried.

This information supports the argument that her skull might have been broken, a matter that was not pointed out in the Medical Jurisprudence’s report. (Amir Kabir newsletter – Nov. 20, 2007) (Dr. Zahra is famous by Bani Ameri in many Media and among friends, but we have heard two websites introducing her as Bani Yaqoub. However, these two persons are the same – she is the girls who the Intelligence

Ministry claims committed suicide in the detention center after being arrested with a boy. Her family believes that it was not a suicide case and she was murdered.)

In Dr Zahra Bani Yaghoob interrogation file, a note written no evidence of crime has been found.

Zahra mother tearful talking about the day she heard about her daughter arrest and the accusation of Hamadan Militia suicidal.

Zahra mother said I didn’t believe my daughter suicide, she said, to find out the situation, I and Zahra father headed to Hamadan. She said when we arrived in Hamadan, it was sunset, and we asked Militia to allow us to see our daughter.

The Militia were ignoring us, we were outside of their building crying and beg them for 12 hours, they told us go to criminal investigation department; go here there, they were passing us around.

People were saying to us they killed your daughter, go to the court, finally we end up at the legal medical centre to collect our daughter dead body!?

Zahra father tearful said that, before they hand over my daughter dead body, they requested money to hand over and money for death certificate, which I deposited and handed in the receipt, then they hand over her dead body, we found a few kicking bruise marks on her body.

At 5 pm the Ambulance carry Dr Zahra Bani Yaghoob dead body to Tehran, Zahra mother followed the Ambulance and keep crying, her father seating inside the Ambulance beside the driver. Hamadan to Tehran destination is seven hours to drive, the mother keep stopping the Ambulance to see her daughter face and hug her.

It’s autumn season and cold the Behesht Zahra Cemetery ground is full of yellow leafs which it is indications of short
life, which that has happened to Dr Zahra Bani Yaghoob life too, that very easily her lives ended by the dictatorship of Mullahs who very easily ending many Iranian lives every day.

Zahra father tearful said she has done nothing wrong, just she was walking with her finance and killed by an uneducated vulgar Militia member of revolutionary guard of Mullahs regime.

Ahmadi Nejad the Mullahs president at the Colombia University in the USA said Iran is a freedom country and the people are the freest nation throughout the world! Now a young girl in the custody of his regime at a detention centre hanged up and accused of suicide?

Zahra father at the Cemetery tearfully telling to the crowd we have noting to loose, until the last moment of my life, I will follow up my daughter assassination, he tearful yelling, I remembered that while, we were in that detention centre waiting, to receive our daughter news, all of that detention centre personnel were laughing at us, showing off nothing important has been happened in their centre.

And now after 40 days of Dr Zahra Bani Yaghoob deaths, her father said that, they easily changing documents in her file but, we have a lot of documents shows that my daughter didn’t committed suicide and she has been assassinated.

Zahra father said during my meeting with the court judge I have been advised to don’t approach foreign media and don’t speak out in the public area.
He said so far I have sent my letters to the Iranian regime leader, to the Iranian Justice leader, but none of them replied.

It’s sunset and dark, on the grave of Dr Zahra Bani Yaghoob, the candle lights on and is among the flakes of flowers spread out the grave, the first drops of rain kissing the surface of the earth. The mood of the crowd conversations is tense, indicates that no one believe the is a suicide case’ the gathering terminating, Dr Zahra Bani Yaghoob father, mother and brother tearful, standing and staring at her grave.

**I Habib Saeedi sorrowfully and sympathetically have translated this article from Farsi to English and sending my condolence to Dr Zahra Bani Yaghoob family and strongly condemn assassination of their loved one.

The Rise of Prostitution among Educated and Married Women

A man and a woman sentenced to death in Mashahd: Concerns about possible stoning sentence